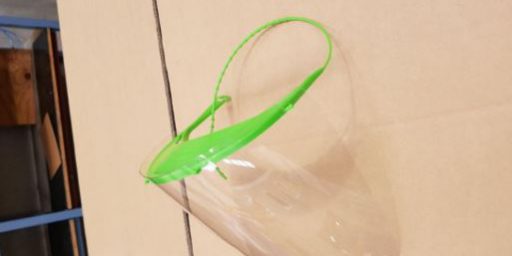 The Hero Shield project is run by a consortium of companies who have lent their expertise to help produce much-needed PPE for Northern Ireland. Lisburn-based company Ad- Vance Engineering is one of the companies heavily involved with the production of the visor, and we spoke to Roger Vance, Managing Director at Ad- Vance, about the project. Vance said: “There’s been a number of companies involved in the design of the Hero Shield, which initially started with a company called Shnuggle, who make baby products.

They were very interested in doing something to help out the NHS, and so we got together with a group of companies, and designed the product.” “What we wanted was to be able to provide this to the health services free of charge, so the money for development and manufacture has been raised through crowdfunding.” “We’ve also got a team of couriers delivering free of charge as well. They come in every day and load up with visors, and then they’re delivered to NHS employees, health trusts, and anyone else in Northern Ireland who needs them.” The headbands are injection moulded, with the visor being cut from PET, and the development has shown how vital injection moulding can be for such urgent and vital projects. Vance said: “We’re currently injection moulding a face visor in 12 seconds so the cost per unit is down to around 12 to 15p.” “We can put this together very quickly and economically, and can produce volume to market without excessive labour costs.” The project has evolved over the weeks and has seen Ad- Vance contracted by electrical goods supplier GlenDimplex, to increase its level of production. “We’re GlenDimplex’s tooling supplier, as they’re looking at bringing the visor into mass production, as they’ve got the capacity to cope with high-volume demand.” “It gives us the potential to plan for the long term.

Obviously we don’t know how long the pandemic is going to last, but if it is a long term scenario then this gives us the potential to mass produce this visor for up to two years.” “I don’t think anyone is talking about mass producing visors at the volumes we’re talking about with GlenDimplex, which would be around 28,000 per day. This will be helped by robot systems and conveyors, and of course we’re involved with the tooling side of things.”

Ad-Vance Engineering are pleased to announce the appointment of David Parry as our new Technical Sales Manager UK.
26 February 2021

We are delighted to announce the appointment of Rebecca Patterson MEng as our new Design Engineer Manager.
26 November 2020

Reshoring benefits in focus
6 May 2020
Go to Top
We use cookies on our website to give you the most relevant experience by remembering your preferences and repeat visits. By clicking “Accept”, you consent to the use of ALL the cookies.
Cookie settingsPrivacy PolicyACCEPT
Manage consent

This website uses cookies to improve your experience while you navigate through the website. Out of these, the cookies that are categorized as necessary are stored on your browser as they are essential for the working of basic functionalities of the website. We also use third-party cookies that help us analyze and understand how you use this website. These cookies will be stored in your browser only with your consent. You also have the option to opt-out of these cookies. But opting out of some of these cookies may affect your browsing experience.
Necessary Always Enabled

Performance cookies are used to understand and analyze the key performance indexes of the website which helps in delivering a better user experience for the visitors.

Analytical cookies are used to understand how visitors interact with the website. These cookies help provide information on metrics the number of visitors, bounce rate, traffic source, etc.

Advertisement cookies are used to provide visitors with relevant ads and marketing campaigns. These cookies track visitors across websites and collect information to provide customized ads.

Other uncategorized cookies are those that are being analyzed and have not been classified into a category as yet.